The Colegio Internacional Costa Adeje is a Spanish education center characterized by the importance that provides to the learning of languages.

From the 2st Cycle of Early Childhood Education, KINDER, students have a first contact with the English language, receive three sessions per week through the English-speaking TET method (Total English teaching).

In the 2nd Cycle of Early Childhood Education, KINDER, our children live a German immersion with a daily hour while receiving three hours of English weekly in K1 and four hours a week in K2 and K3.

The students from 3rd to 6th of elementary education, moreover they count with the Physical Education and the Arts subjects in English.

In the majority of the stages an unfolding of the classes is carried out to study languages in small groups of 15 or fewer students.

Due to the great number of foreign students that every year arrives to our school, we are used to carry out support classes of Spanish within the school Schedule.

There are progressively more students attending to the Cambridge Institute and Goethe Institute level exams, for which we do have preparation classes outside the school timetable. 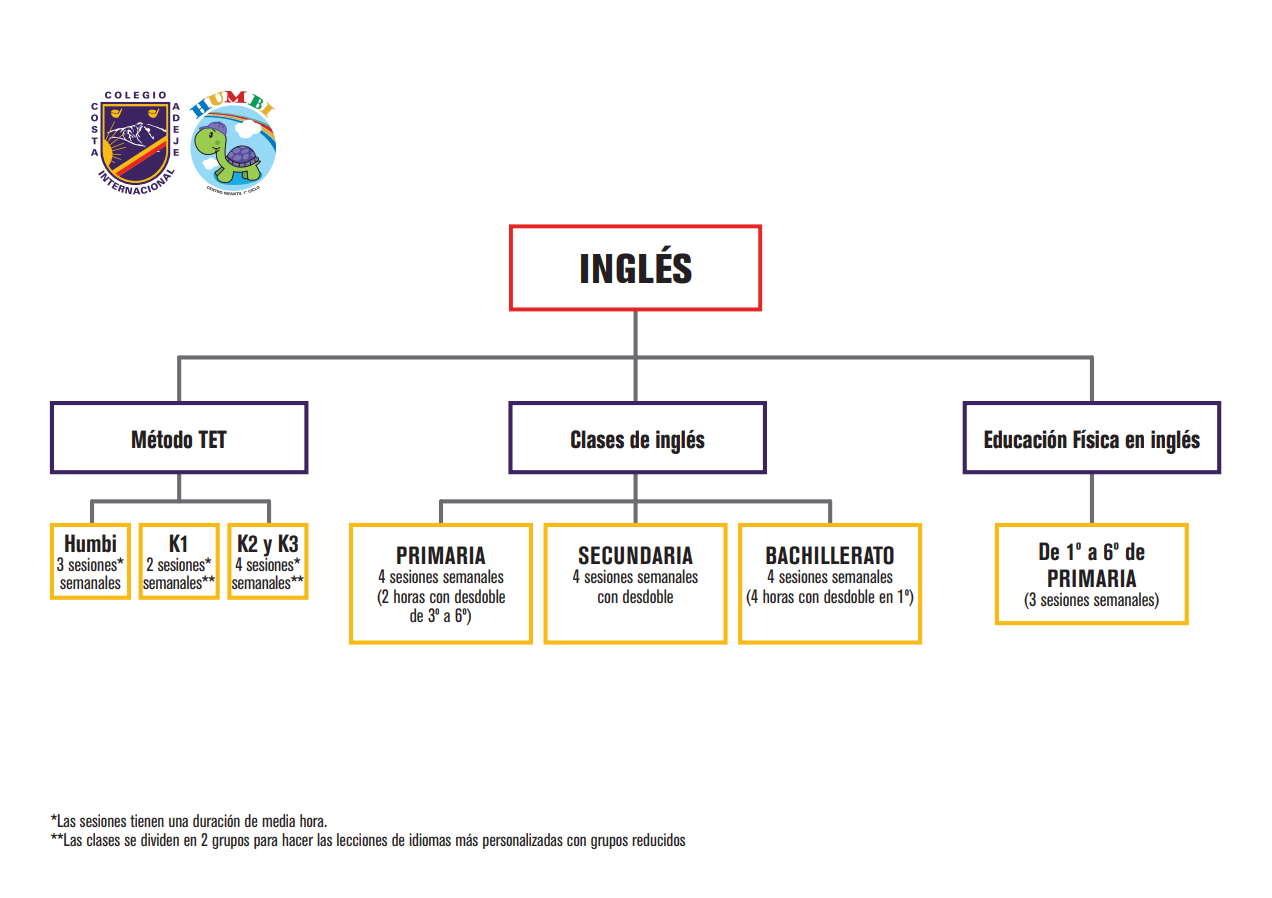 Starting from the school year 2018/19, we will teach in Kinder a new method of teaching the English language known as Total English Teaching (TET) for students from 0 to 5 years.

This is a system that does not consider the language in a fragmented way, but presents all the grammatical structures in real and meaningful contexts for children.

With this method the children acquire the grammatical structures and the phonetics of the English language with total naturality.

Through the learning of English they will receive an early stimulation that will not only help them to become familiar with the English language, but it will also facilitate the learning of many intellectual activities.

They will have the ability to acquire the pronunciation of an English speaking in a playful and totally spontaneous way.

Thanks to this system the students will develop an affective relationship with the language, with the adults and with the other children who share this learning.

That programme consist on:

For more information consult the links below: 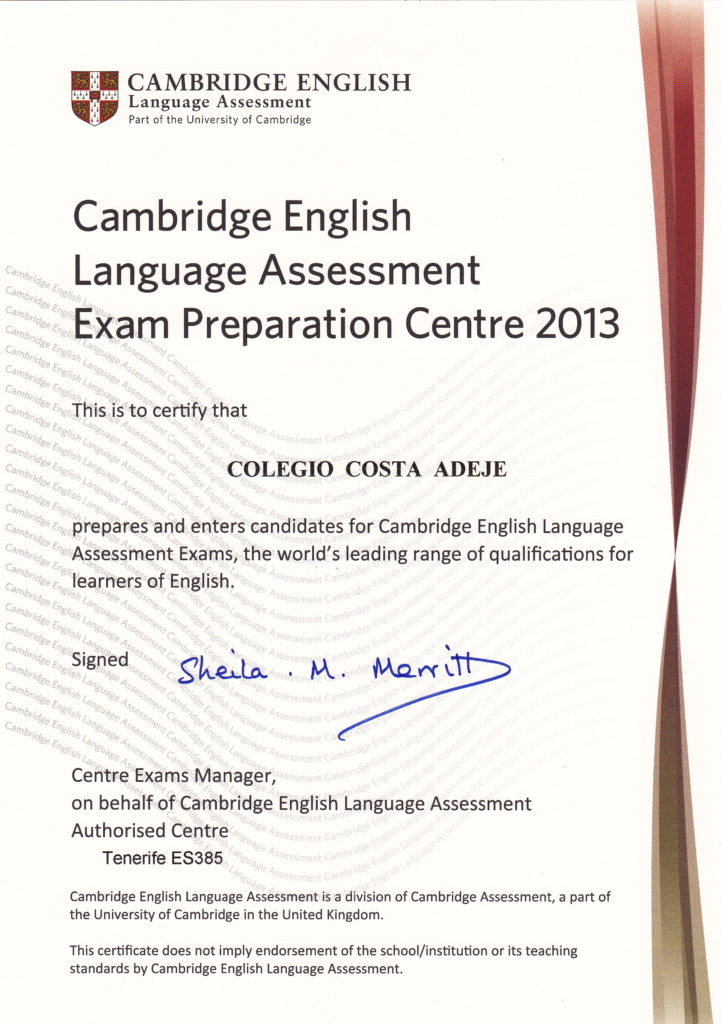 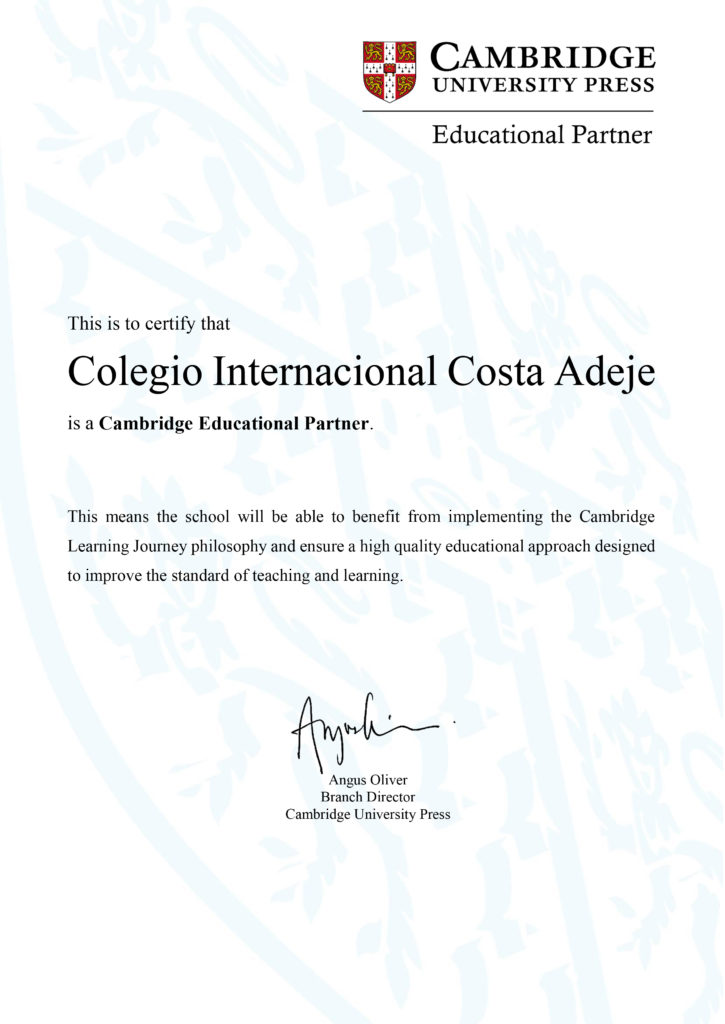 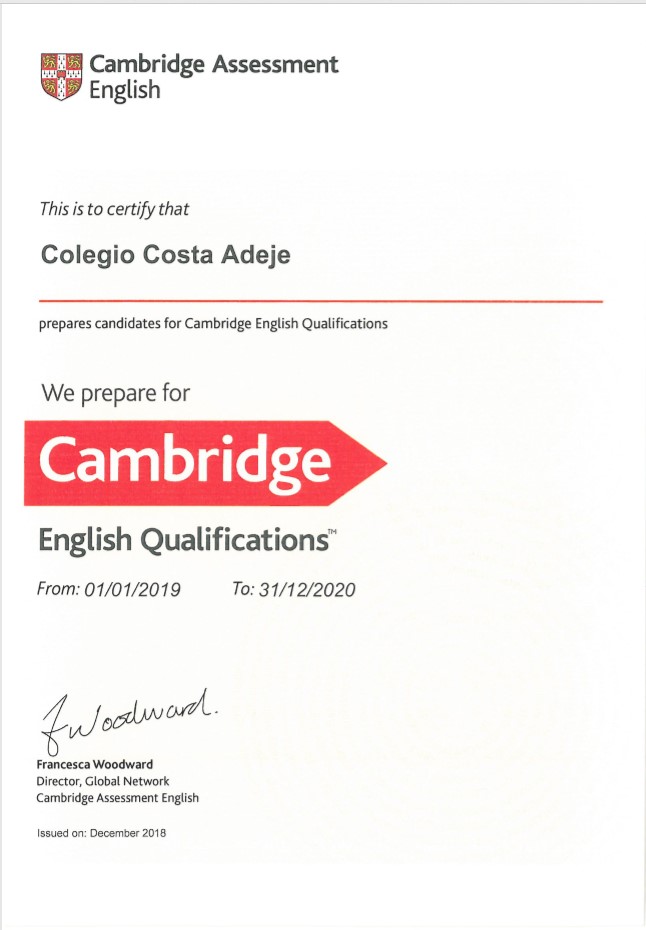 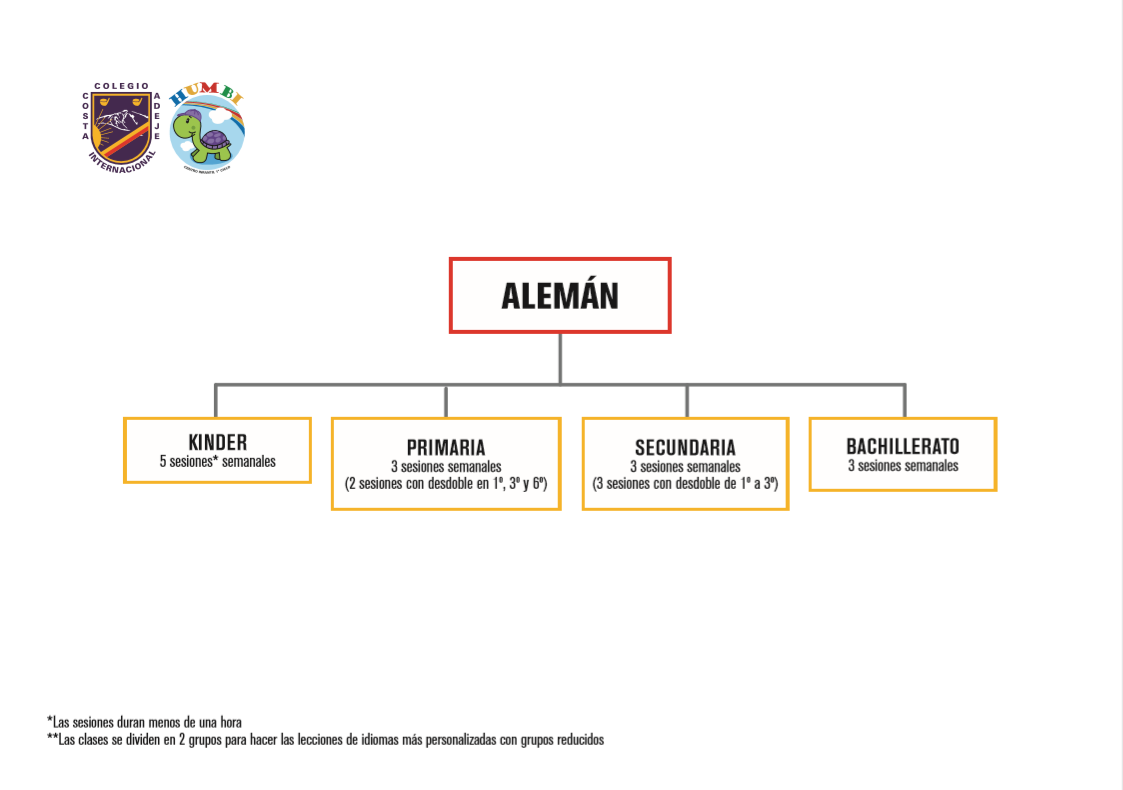 The Goethe-Institut is a German public institution of great relevance and whose mission is to promote, disseminate and promote knowledge of the German language and its culture. In addition, this public entity seeks to promote foreign relations between Germany and the countries where it is located. Its head office is in Munich. It has been established since the beginning of 2013 by thirteen institutes in Germany and 145 abroad.

This institute is the equivalent of the Instituto Cervantes Español, the Italian Dante Alighieri Society, the French Alliance française, British Council or the Portuguese institute Camoes. All of them work to disseminate their respective cultures throughout the world, thus favouring the knowledge of some of the main European languages, made by which they have been awarded the Prince of Asturias Prize for communication and Humanities in the year 2005.

In the island of Tenerife and in Gran Canaria, our archipelago has two examination centres of the Goethe Institute and the International School Costa Adeje exercises official exams for its students every year under the supervision of the examining centre of Tenerife Which is headquartered in Tabaiba Alta. More information about the official exams can be found on the website institutoalemantenerife.es.

The advantages of a certificate from the Goethe Institute are that linguistic competence in German is still more valuable worldwide if it is accompanied by a language certificate. And it is that only after an examination one can realize clearly the level of their knowledge. In addition, only a recognized document can demonstrate such knowledge in the face of third parties, for example, when applying for a job or a scholarship at the university to participate for example in an Erasmus project.

The Goethe-Institut’s certificates are highly valued worldwide. As an example, the B1 certificate is a necessary condition for obtaining German nationality.

In German universities and colleges, the Goethe-Zertifikat C2: Großes Deutsches Sprachdiplom is a necessary condition to apply for admission. But also in foreign universities the certificates of the Goethe-Institut are very helpful.

Thus the Goethe-B2 and C1-certificates exempt in some countries to do the baccalaureate in German. In many EU universities, a Goethe certificate gives you valuable credits in the corresponding subject. 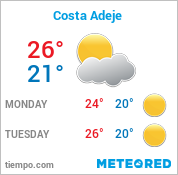 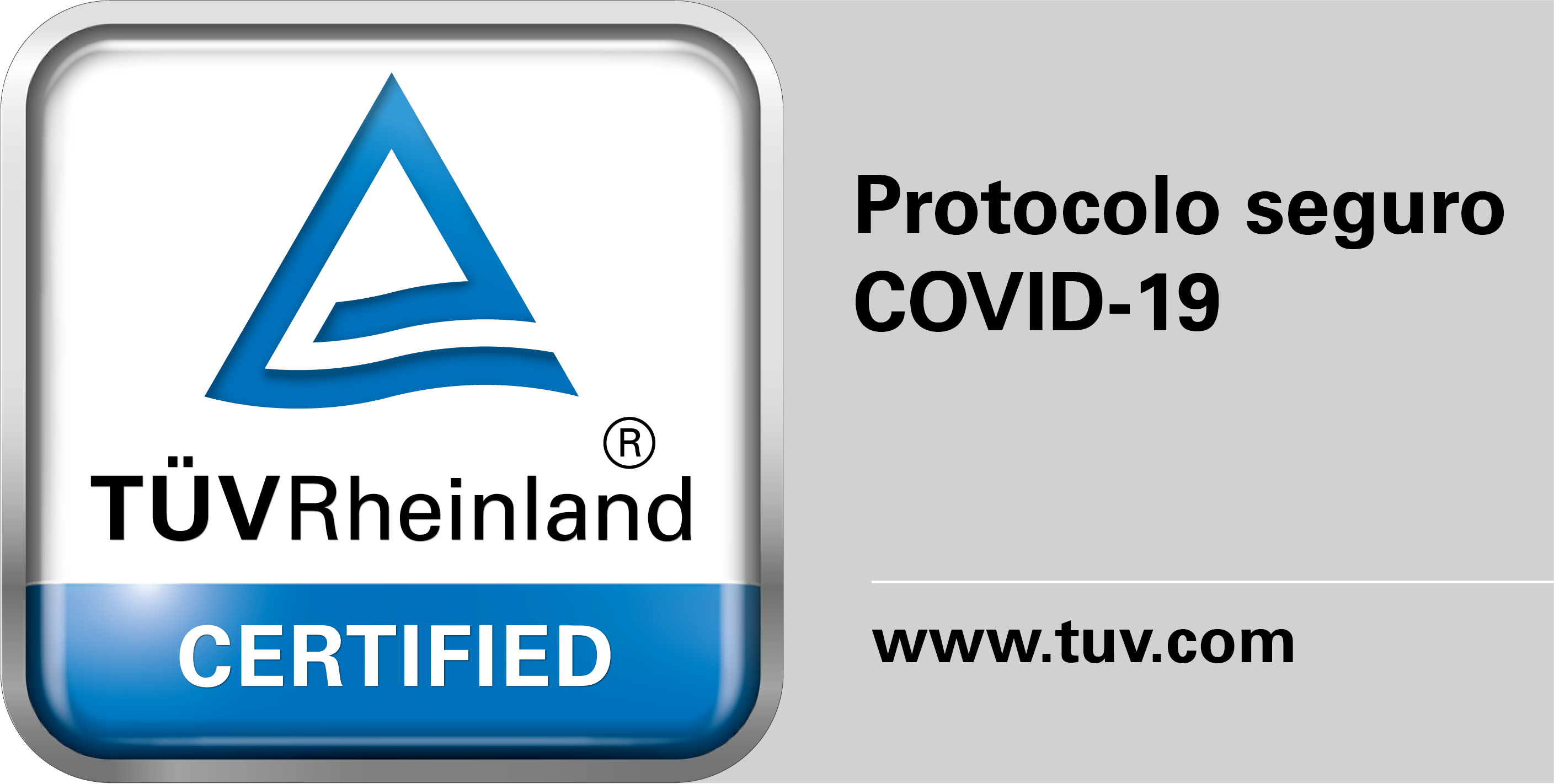